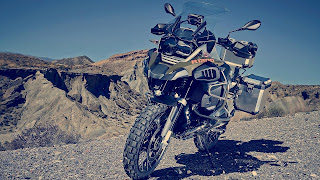 Munich. The launch of ABS Pro as a retrofit option for the BMW HP4 in October 2014 represented a consistent refinement of BMW Motorrad ABS in that it also enabled ABS-supported braking in banking position on a supersports bike for the first time. In June 2015, ABS Pro entered series production in the S 1000 XR as optional equipment ex works. As part of the “Safety 360°” strategy, BMW Motorrad is quickly expanding the availability of this safety feature to other models.

Since August 2015, ABS Pro has been available for the R 1200 GS and R 1200 GS Adventure (optional equipment ex works or retrofit option) as well as the K 1600 GT/GTL (standard equipment).

The retrofittable ABS Pro of the S 1000 RR from model year 2015 will also include the “Race” riding mode. The slip threshold and brake pressure gradient have been set at a higher level for use on roads with high friction coefficients compared to the “Rain” and “Sport” modes.

The ABS Pro function was deliberately conceived for use on public roads, where unexpected dangers can always potentially lie in waiting. The system provides more safety when braking while cornering. Here the system prevents the wheels from blocking even when the brakes are applied quickly in a banking position; this reduces abrupt changes in steering force on shock-braking manoeuvres and stops the motorcycle from rearing up unintentionally.

You will find press material on BMW motorcycles and BMW Motorrad rider equipment in the BMW Group PressClub at www.press.bmwgroup.com.

With its three brands BMW, MINI and Rolls-Royce, the BMW Group is the world’s leading premium manufacturer of automobiles and motorcycles and also provides premium financial and mobility services. As a global company, the BMW Group operates 30 production and assembly facilities in 14 countries and has a global sales network in more than 140 countries.

The success of the BMW Group has always been based on long-term thinking and responsible action. The company has therefore established ecological and social sustainability throughout the value chain, comprehensive product responsibility and a clear commitment to conserving resources as an integral part of its strategy.