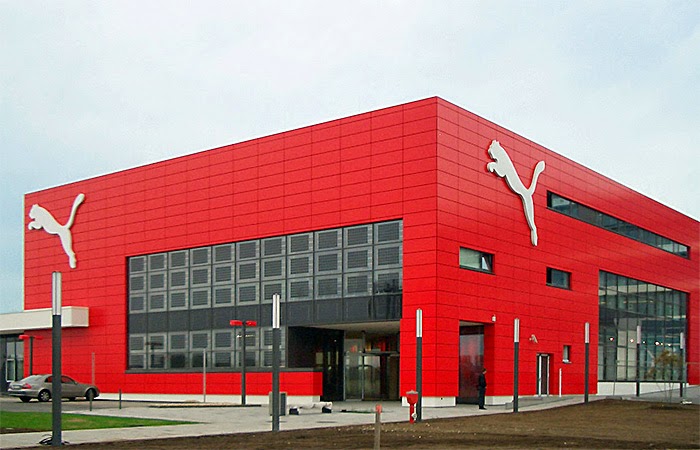 Key Sales Figures at a Glance

PUMA’s currency adjusted sales and operating margin for the first quarter were in line with our expectations – yet negatively impacted by adverse currency affects.During the quarter, we continued to make progress towards our mission to become the Fastest Sports Brand in the world and achieved all our key project milestones in this pursuit.We know that the repositioning of PUMA and the turnaround of the business will take time, but I am convinced that we are progressing well on all our key strategic priorities and that we have initiated the right projects to make 2014 the start of the turnaround.”

PUMA’s first quarter sales performance in 2014 was in line with our expectations. Currency adjusted sales declined slightly by 0.5% to € 726 million. This represents a decrease in reported terms of 7.1%, as currency volatility in Russia, Turkey, North America, Latin America, India and Japanhad anegative impact on sales in Euro terms.

Sales rose by0.3% currency adjusted to € 337 million in the EMEA region. Russia, Turkey and the United Kingdom continued to deliver strong performances in the first quarter of 2014, which offset declines in Scandinavia and France, where wholesale revenues remained weak.
Sales in the Americasdeclined by 0.5% currency adjusted to € 235 million. Sales in North America improved slightly, while we recorded mixed sales performanceswithin Latin America with improvements in Chile and Argentina and a major decline in Brazil.
Asia/Pacific sales decreased by 2.1% currency adjusted to € 153 million. Sales in China were up slightly, but business in Oceania decreased. Japan also declined, impacted by weaker sales in the Golf category.

Footwear sales declined by 7.1% currencyadjusted to € 321 million as the Motorsport business continued to decline in mature markets.The Teamsport category was, however,strengthened by the positive global reception of the new evoPOWER football boot during the first quarter of the year.
Ahead of the Football World Cup in June,the launch of PUMA’s football jerseys for itseight teams, including Italy, Chile and Ghana, helped Apparel sales increase by 3.0% currency adjusted to € 246 million.
Accessoriesperformed well in the first quarter, with sales increasing 9.5% currency adjusted to € 159 milliondue to continued demand for PUMA’s socks and bodywear.

PUMA’s gross profit margindeclined by 60 basis pointsfrom 49.1% to 48.5% in the first quarter due to negative currency impacts and changes in the regional and product mixes.The Footwear gross profit margin declined from 46.1% to 44.1%,as high margin Motorsport Footwear in particular declined. Apparel increased from 51.5% to 53.6% related to strong Teamsport business and Accessories decreased from 52.6% to 49.7% impacted by negative currency effects.

OPEX improvement in the first quarter

PUMA continued to maintain a strict approach to its operating expenditures in the first three months of the year. OPEX declined by 3.8% to € 298 million inspite of higher marketing investments.

Improved first quarter operating expenditurescould not fully offset weak currencies in a number of countries, which impactedreported sales,and a softening of the gross profit margin. As a result, PUMA’s operating profitdecreased from € 79 million to € 59 million for the first three months of 2014. The EBIT ratio decreased from 10.1% to 8.1%.

The financial resultimproved from € -4.0 million to € -3.2 million in the first quarter. The result remained negative due mainly to currency conversion impacts.

The company’s continued strong balance sheet management resulted in an 11.5% decrease in inventory to € 524 million and a 14.8% decrease in trade receivables to € 506 million. With the decline in trade payables also taken into account, PUMA’s working capital improved by 13.1% from € 775 million to € 674 million at the end of March.

The Free Cashflowbefore acquisitionsimproved slightly to € -132 million in spite of lower operational cashflows.
Capexincreased from € 9 million to € 12 million, which was mainly invested in the opening and refitting of selected retail stores as well as office and IT equipment.

PUMA’s net cash position improved from € 207 million to € 229 million at the end of the first quarter.

In March, PUMA revealed the new national kits for its eight national footballteams heading to the World Cup in Brazil this summer. The home and away kits for Italy, Switzerland, Algeria, Cameroon, Ghana, Ivory Coast, Chile and Uruguay all feature PUMA’s new football apparel innovation PWR ACTV, a first-to-market use of both athletic taping and compression within the apparel.
Cobra PUMA Golf athlete Lexi Thompson fulfilled her number one goal for 2014 by winning her first ever major. After taking the lead during the second round,Lexi shot a final round of 68 to win at the Kraft Nabisco Championship. She has been using Cobra Golf equipment and wearing PUMA Golf gear on the course since she first turned pro in June 2010.

In Formula 1, Lewis Hamilton of the PUMA-supplied Mercedes AMG Petronas team took the world championship lead from his Mercedes teammate NicoRosberg by winning his fourth race in a rowat the Spanish Grand Prix last Sunday. Lewis led from start to finish to win a tense battle with Nico, with the rest of the field far behind. With PUMA-partnered Ferrari driver Fernando Alonso currently third in the standings, the current top three F1 drivers are all equipped with PUMA products and wear the PUMA evoSPEED II Pro.

In line with PUMA’s mission to become the Fastest Sports Brand in the World, we have continued our efforts to make PUMA faster and more efficient. This strategy encompasses the repositioning of PUMA as the World’s Fastest Sports Brand, the improvement of our product engine, the optimization of our distribution quality, and increasing the speed within our organization and infrastructure.

In terms of our brand repositioning, we have completed the definition of our brand platformand are now translating them into a marketing campaign, which will be launched in August 2014 – the biggest campaign for PUMA ever. The campaign will showcasemany of our great athletes like Usain Bolt, Mario Balotelli, Rickie Fowler, Marta and Lexi Thompson in their pursuit of our brand mantra Forever Faster.

To improve our product engine, we have adapted our design language in accordance with our new brand platform. TorstenHochstetter, our Global Creative Director, translated our brand mantra “Forever Faster” into a new distinctive design language for PUMA, which takes its clear inspirations from our heritage and our roots in sports. With innovative products and a more commercial focus, we are convinced that we will have a strong product offering in place to excite the market in Spring/Summer 2015.

We have also started to improve the quality of our revenues and distribution. Our current focus is to reestablish the relationships with our Key Accounts using dedicated product and marketing programs. With the PUMA Lab at Foot Locker, we have a large scale program in more than 100 doors in the US in place, which provide a great opportunity to showcase our brand and great products in this opinion-leading retailer. We are satisfied with the results as our comparable sales are significantly up.

Furthermore, we are currently adapting our direct-to-consumer channels to our new brand direction: Our new unified eCommerce site will be launched in the USA, Europe and Russia by mid 2014 and our new retail format will launch with our new full-price store opening in Dubai in the fourth quarter of 2014.

We have also continued to make our organizational structure and setup faster. As of 2 May, our PUMA Village development center in Vietnam is closed. Our developers have moved into the sample rooms of our suppliers’ factories to speed up our development process, while our office employees moved into our new offices in central Ho Chi Minh. The property sale of PUMA Village is currently ongoing. Our relocations of the Lifestyle Business Unit from London and of the Global and European Retail Organization from Oensingen, Switzerland, to our headquarters in Herzogenaurach are in process and will be finalized by the end of May and Septemberrespectively.


Outlook for the Financial Year 2014

2014 will be a turnaround year for PUMA, where the brand will be re-established in the market place and brought back to a path of profitable and sustainable growth in the mid-term. To support this turnaround, PUMA will continue to invest strongly in marketing and sports assets, while maintaining tight control on other operating expenditures.

Based on the results of the first quarter and our assumptions at the beginning of the year, which foresaw stable currencies, our expectations for full year net sales (flat), gross profit (slight increase), OPEX (increase due to Marketing Investments) and EBIT/Net Earnings (approx. 5% / 3% of net sales respectively) remain unchanged. Given the current currency volatility, which is weighing negatively on our results, there may be a correspondingly negative impact of around 50 basis points on the EBIT and Net Earnings margin for the full year.

More news about Puma ? Use the search engine at the right top of the site.