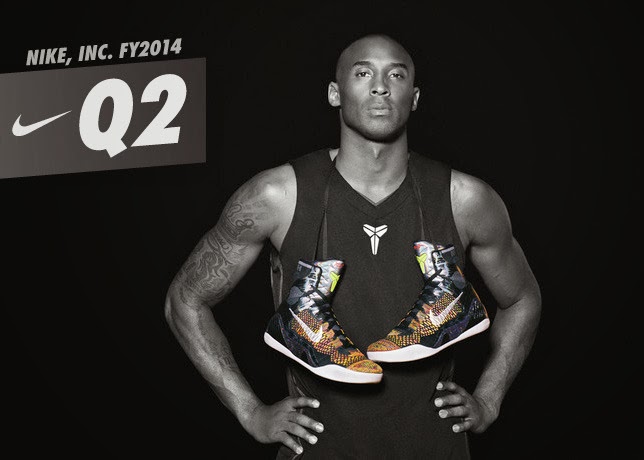 BEAVERTON, Ore., December 19, 2013 – NIKE, Inc. (NYSE:NKE) today reported financial results for its fiscal 2014 second quarter ended November 30, 2013. Earnings per share for the quarter were up 4 percent due to higher revenues as a result of strong demand for NIKE, Inc. brands, gross margin expansion, and a lower tax rate partially offset by the impact of higher SG&A investments in NIKE, Inc. brands and business capabilities.


"Our strong second quarter results show why NIKE leads the industry,” said Mark Parker, President and CEO of NIKE, Inc. “Our powerful portfolio fuels growth across our categories and geographies. Because we never stop innovating, we enhance our ability to serve the athlete, inspire consumers and elevate the marketplace. We will continue to seize the best opportunities to drive sustainable, profitable growth for our shareholders.”*

During the second quarter, NIKE, Inc. repurchased a total of 5.5 million shares for approximately $402 million as part of the four-year, $8 billion program approved by the Board of Directors in September 2012. As of the end of the second quarter, a total of 29.2 million shares had been repurchased under this program at a cost of approximately $1.7 billion, an average of $58.82 per share.

As of the end of the quarter, worldwide futures orders for NIKE Brand athletic footwear and apparel scheduled for delivery from December 2013 through April 2014 totaled $10.4 billion, 12 percent higher than orders reported for the same period last year, and 13 percent higher on a currency neutral basis.*

NIKE management will host a conference call beginning at approximately 2:00 p.m. PT on December 19, 2013, to review second quarter results. The conference call will be broadcast live over the Internet and can be accessed at http://investors.nikeinc.com. For those unable to listen to the live broadcast, an archived version will be available at the same location through 9:00 p.m. PT, December 26, 2013.

*The marked paragraphs contain forward-looking statements that involve risks and uncertainties that could cause actual results to differ materially. These risks and uncertainties are detailed from time to time in reports filed by Nike with the S.E.C., including Forms 8-K, 10-Q, and 10-K. Some forward-looking statements in this release concern changes in futures orders that are not necessarily indicative of changes in total revenues for subsequent periods due to the mix of futures and “at once” orders, exchange rate fluctuations, order cancellations, discounts and returns, which may vary significantly from quarter to quarter, and because a significant portion of the business does not report futures orders.


More news about Nike ? Use the search engine at the right top