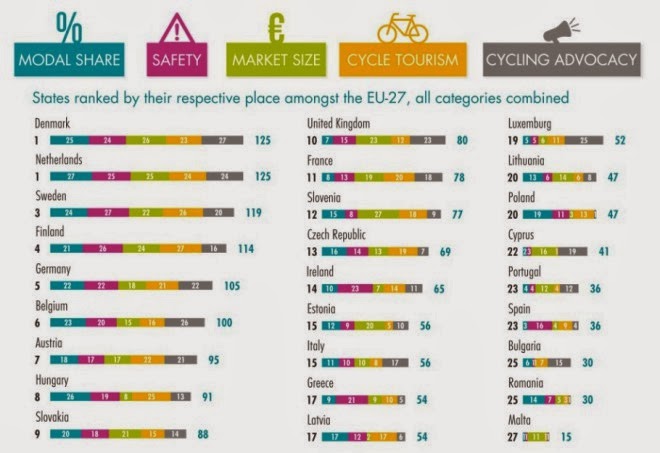 The European Environment Agency (EEA’s) annual Transport and Environment Reporting Mechanism (TERM) report is a benchmark document for policy makers and transport planners. This year, the report focuses on urban transport and includes references to ECF publications in some important places. A reason to talk to its authors.

Besides an overview of current transport demand, the pressures from the transport sector on the environment, and related impacts and responses, this year’s TERM report focuses on urban transport. What’s more, it uses ECF fact sheets on bike sharing and CO2 savings from cycling  as well as ECF’s Cycling Barometer to underpin its conclusions. ECF published the Cycling Barometer for the first time this year in order to provide an overview about the cycling climate in European countries.

“We were looking for European figures for cycling, and the ECF documents were excellent sources for the information we needed,” says Alfredo Sánchez Vicente, project manager for transport at the EEA. “It is difficult to measure the situation of cycling in different European countries, but with the Cycling Barometer we had a reliable comparison. It also allowed us to highlight the positive development of cycling in some countries without a strong cycling culture, especially in southern Europe.”

On bike sharing, the EEA was glad that an overview was available as well: the ECF fact sheet giving an overview of bike sharing in different countries. ”There is a lot of data on bike sharing systems in individual cities,” explains Alfredo Sánchez Vicente, “But there was little to nothing from a European perspective before ECF published this excellent overview.”

Cycling and walking on the rise, but air quality still a problem

The TERM report finds that the mode share of walking and cycling is on the rise in most cities and metropolitan areas in Europe (see p. 46). As prime examples, the EEA cites Stockholm and Paris, where the share of walking and cycling in the modal split rose by 10% and by 5%, respectively between 2009 and 2011. At the same time, individual motorized transport decreased in these places, which suggests that people made the switch to non-motorized active modes of transport.

A good way to encourage leaving one’s car at home is the introduction of a congestion charge, according to the EEA. Traffic and CO2 emission levels decreased quite drastically in cities that limited access for cars to their inner cities. Rome, for instance experienced 18% less motorised traffic and 21% less CO2 emissions after the introduction of its congestion charge scheme (p. 51).
Yet, the report also shows that air quality is still a problem in many urban areas in Europe.

Meanwhile, the ECF cycling barometer is to be published again in 2014. Asked whether he would use it again as a source if he had to compile another report about urban transport, Alfredo Sánchez Vicente has a clear answer: “I would, definitely.”