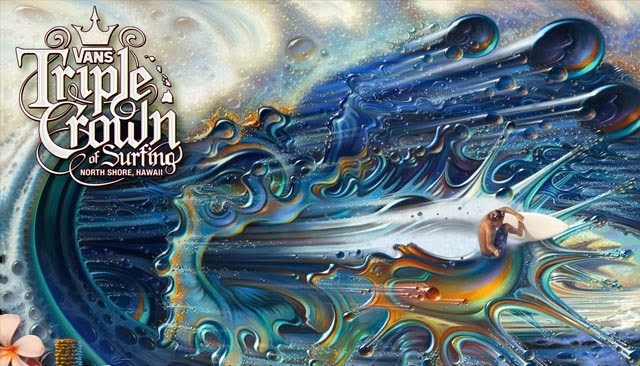 CYPRESS, CA (DECEMBER 19, 2013) - With an epic final day of the Billabong Pipe Masters webcast globally this past Saturday from Oahu's Banzai Pipeline, the Vans Triple Crown of Surfing (VTCS) set a record for the largest audience to ever witness an action sports event as more than 3.5 million people generated more than 3.9 million webcast streams and a staggering 2 million hours of webcast viewing. Over 31 years of VTCS North Shore tradition as surfing's ultimate proving grounds, audiences from more than 70 countries witnessed the best professional surfing has to offer over three events at separate breaks: The Reef Hawaiian Pro from Haleiwa,

"The gap between live surfing and live stick-and-ball sports has been officially erased," says Vans' VP Global Marketing and GM Americas Doug Palladini. "The quality of production, streaming and audience size make surfing the new gold standard in live interactive events, and we are blessed to have had the best surfers in the world collaborating with Mother Nature this year."

Multiple camera angles-including from the water looking into the tubes-along with instant replay, hi-definition super-slo-motion effects, aerial views, and interactivity with show hosts drove millions of viewers to spend an incredible 1.1 million hours of streaming, many binge-watching for eight hours at a time. During the Billabong Pipe Masters final day, a massive buzz lead trending topics across social platforms and drove an equally large interactive audience, resulting in event totals of more than 2.2 million viewers generating 2.3 million streams in surfing's largest one-event webcast ever.

"When the stars line up as they did for this year's event, I am not surprised to see all previous webcast records smashed," says Billabong's VP Global Marketing Graham Stapelberg. "However, it took a truly dedicated and talented team to achieve this year's new highs, for which we are wholeheartedly thankful."

With almost every heat holding a title, championship, or World Tour qualification outcome in the balance, drama was omnipresent throughout the VTCS's six weeks, but never higher than the final day of the Billabong Pipe Masters, with waves as big as Pipeline can handle. "Today was one of the most special days in my life," says Billabong Pipe Masters Champion Kelly Slater. "It's a day I have dreamed about since I was a little kid - big, perfect, West-angled Pipeline and a showdown at the Pipe Masters. If I had stepped away from the sport five years ago, I wouldn't have had today. I want more days like this so I'm definitely back next year."

Vans®, a VF Corporation (NYSE: VFC) brand, is the original action sports footwear and apparel brand. Vans collections include authentic footwear, apparel, accessories and snowboard boots that are sold globally in more than 170 countries through a network of subsidiaries, distributors and foreign offices. VF Outdoor, Inc. owns and operates more than 300 stores of the Vansbrand in the United States and internationally, each offering a wide range of Vans footwear and apparel while communicating the brand and athletes' rich stories. The Vans brand promotes action sports lifestyle and youth culture through support of athletes on boards and bikes all over the globe and through progressive events such as the Vans Triple Crown of Surfing®, the Vans Downtown Showdown, the Vans Pool Party, the Vans Warped Tour® and surfing's most prestigious contest, the Vans US Open of Surfing.

More information about the Vans brand can be found at www.vans.com, Twitter @vans_66 and www.facebook.com/vans.

Billabong the Iconic Australian surfwear company since 1973 is proud to have the Pipe Masters as it's #1 ASP event honoring the memory of surf team member Andy Irons who passed away 3 years ago on November 2nd, 2010.  Billabong's founder Gordon Merchant had this to say "Although our company was born in Australia, we have always acknowledged Hawaii as the spiritual home of surfing.  We have supported professional contests as far back as 1986  with the Billabong Pro hosting some of the greatest moments in surfing history down to this year's Pipe Masters as Mick Fanning and Kelly Slater battled it out for the world title.


More news from Vans ? Use the search engine at the right top.