Crowdfunding: The Pratley Co presents its new product on Kickstarter 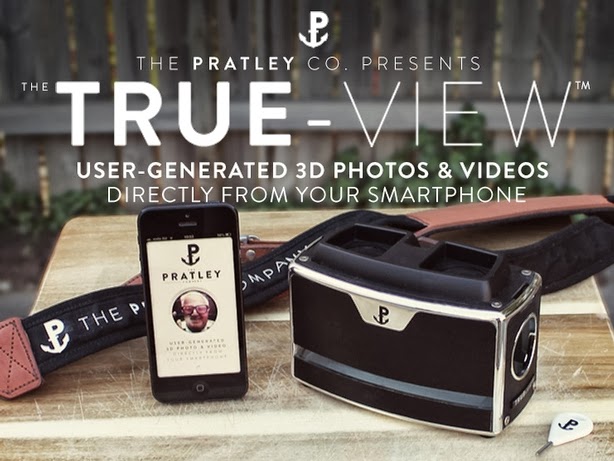 The Pratley Company is a recent tech startup based out of London, Sydney and Auckland. The Pratley Company has just released it’s first ever product, the TRUE-VIEW™, and has until the 1st November 2013 to raise £125,000 ($200,000 US Approx) via the crowdfunding website - kickstarter.com

The TRUE-VIEW™ is the first ever device that can turn both Android and iOS smartphones into a 3D camera. Styled after the classic box cameras of the 1950s, the True-View strategically places mirrors in front of your smartphone’s camera. This allows the True-View app to capture the two versions of a scene it needs to assemble a 3D video or 3D still picture. When the left eye views the left image and the right eye views the right image independently of each other, a stunning 3D effect is seen.

Here's a link to the Kickstarter page, which includes more photos and detailed information: http://www.kickstarter.com/projects/1972219308/the-true-viewtm-3d-photos-and-videos-from-your-sma?ref=live

The Pratley Co aim to establish themselves as a leader within the user-generated 3D content market.

“We’re moving into a new space here. We’re trying to change people’s perceptions of 3D as it’s always been seen as a bit gimmicky. We've positioned the TRUE-VIEW as a collectors item with a bit of a hipster feel to it and the 3D content that it allows you to capture is aweinspiring. We hope that anyone who likes the 'retro-ness' of Instagram, for example, will be interested in what we're doing” - Peter Brennan, Founder of The Pratley Co.

1. It allows you to take 3D photos and videos directly from your smartphone.
2. These can then be viewed through the TRUE-VIEW or AirPlayed to a 3D TV.
3. We’ve drawn design inspiration from the old box cameras of the 1920’s & 30’s.
4. The TRUE-VIEW & Pratley Co App work on both iOS and Android platforms.

About The Pratley Co and its Kickstarter campaign:

1. We’ve been working on this project behind closed doors for the last 12 months.
2. The Pratley Co is named after our Grandfather, Raymond Pratley, who passed away at the end of 2011.
3. Our Kickstarter video has been shot and directed by Peter Hamblin, the Director of the new Gumball 3000 documentary.
4. The Pratley Co is made up of 3 people:
- Peter Brennan – Founder
- Oscar Fernandez – Creative Director
- Martin Brennan – Director
5. Against huge odds, we’ve been accepted to exhibit at Web Summit in Dublin at the end of October ’13. Out of over 5,000 applications they selected 300, and we made it! We’ve also been selected to attend Pitch (top 100 startups) within Web Summit to Pitch to investors and the media.