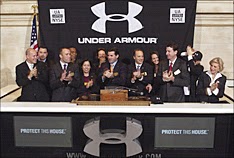 Kevin Plank, Chairman and CEO of Under Armour, Inc., stated, "We have a consistent formula that is driving success across our business:  deliver newness and innovation and the consumer responds.  This has been instrumental in driving net revenue growth in excess of 20 percent for the past fourteen straight quarters and we will continue to fuel this strategy going forward.  During the quarter we introduced our latest apparel innovation, ColdGear Infrared, which utilizes a ceramic thermo-conductive inner coating to absorb and retain body heat.  With the limited release of Speedform we also provided a glimpse of where we can take footwear and redefine fit in the category."

Plank concluded, "The sustained momentum we are generating domestically will help fuel our global ambitions.  Many of these global efforts are ramping up with recent specialty stores opening in China, Japan and Mexico, e-commerce platforms launching in Hong Kong and Taiwan, and new offices opening in Brasil and Chile.  Moreover, we are better aligning our internal leadership to help capitalize on these global opportunities, while also adding talent across our direct-to-consumer businesses.  We have never been better positioned to take the Under Armour performance story to athletes around the world."


By press release through sportsonesource


More news about Under Armour ? Use the search engine at the right top