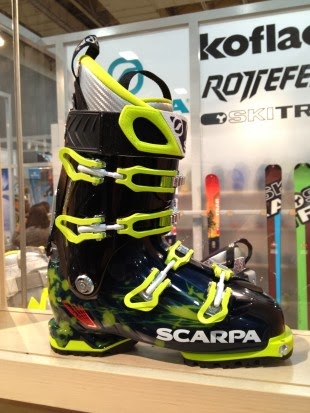 This is the second year in a row SCARPA has earned an Editor’s Choice Award from Backpacker. Last year, Backpacker also deemed the SCARPA Alien ski boot as an award winner.

Backpacker testers cited the Freedom boots’ “near-universal appeal” to different types of skiers as one of the standout factors in giving them an Editor’s Choice Award.

“Whereas other boots appeal exclusively to experts, or to ultralighters, or to big guys, the Freedom SL won everybody over—from King Kong to Tinkerbell—making it the most-coveted boot of them all,” Backpacker’s editors wrote.

The unique feature of the Freedom series boots is how well they balance downhill performance with the ability to walk and tour like a backcountry boot. That’s thanks to a powerful overlap construction, and an integrated carbon-fiber frame underfoot – SCARPA’s Carbon Core Construction – that provides maximum power transfer to the ski. When it’s time to walk or tour, however, the Ride Power Block mechanism completely disengages into two separate pieces for 27 degrees of friction-free ankle mobility. Combine that with a weight under four pounds per boot and a substantially more robust way to connect interchangeable sole blocks to the lower boot, and the result is nothing short of game-changing.

The Freedom SL boots are made with lighter Pebax material and come with a lugged sole compatible with tech bindings. The Freedom boots are made with Primary HP, and proprietary SCARPA-sourced polyurethane, and come with soles compatible with alpine bindings. Both soles will work in a range of alpine-touring bindings, and the soles can be easily swapped on either boot.

The Freedom series boots are available this fall on retail shelves, and are currently shipping to retailers. Along with those boots, SCARPA also added a larger men’s shell size – size 33, men’s size 15 – in its popular Maestrale series of boots.

About SCARPA and SCARPA North America

Founded in 1938, SCARPA builds performance footwear for climbing, hiking, skiing, mountaineering, trail running and other outdoor pursuits from its headquarters in Asolo, Italy. SCARPA has been owned and operated by the Parisotto family since 1956. In 2005, SCARPA opened its North American headquarters in Boulder, Colo., staffed and directed by veterans of the North American outdoor industry, to oversee sales, marketing and distribution in the U.S.A, Canada and South America. For more information about SCARPA footwear, visit www.scarpa.com.


More news about Scarpa ? Use the search engine at the right top